The first blooms of the season on the Rose of Sharon.  I so look forward to these blooms and their beauty. 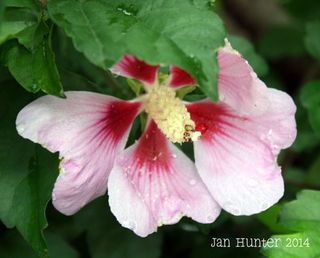 Upcoming projects will be necessitate the use of stencils... so happy that my machines work well with the stencil materials for the most part.  Only a few problems here and there, but nothing that a little bit of careful use of a craft knife can't resolve.  It's kind of fun after that to see the results too during some fun and creative time.  Can't show you much yet, but hopefully, in a few days.

It's the "wet" season here right now.  Storm after storm lining up and dumping much needed moisture in our area... We're having to pump the excess out of the pool again today -- this seems like a common happening every May or June around here.  I'm pretty sure we got close to 3 inches of rain between midnight and 3 am this morning.  It's still sprinkling now... and it doesn't appear that the pump is making much progress.  Hope it will catch up before the next wave of big storms arrive later today.

One thing about the rain is that everything looks so green and beautiful.  The lawn is a bit mushy to walk on though... and will definitely need a mowing and trimming by Wednesday, which appears to be the only day with a bit of sunshine and no rain forecast.  LOL
Friday, I decided to do a little bit of browsing through Pinterest again for some shaped cards.  Yep, in the mood to see how I can translate some ideas using basic shapes and create something similar.  It worked for one card I found that uses Michele Ghent's idea for a chicken shaped card.  Here's mine. 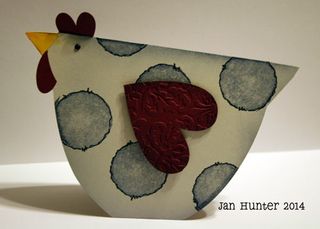 Cut on grey cardstock (from the ream that my errand runner purchased thinking it was white in the store's lights, btw) stamped, doodled, embossed and inked for some additional texture.  Added a mini brad for the eye.  It's so much fun to play.  This was my first one.  I made another using a circle stencil template with similar results and have plans to try a different stencil later this week.  I like the blue and deep red together for this folksy look.

There's more to share.  I decided to push eCal a little further Friday afternoon.  I've been playing with the Fill >pattern aspect.  Pinterest prompted me to try another "chickie" card.  I thought about just creating the layers and then cutting the shapes, however, I decided to just print and  cut the card... this was so much fun and I have several other ideas for embellishment and adding a background to the card... 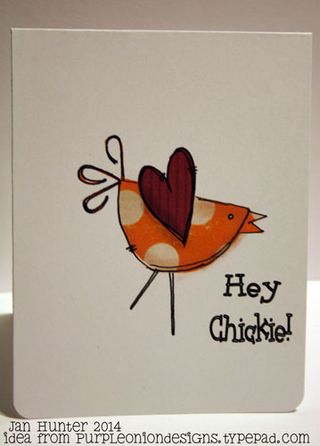 I filled the shapes with some Echo Park digital papers (set at 12 x 12 in the load image dialog box).  Then, printed the image and cut the stock into 2 cards.  That worked really well.  I decided to add some additional details by doodling and adding some messy chalk shading.

A half circle, heart, for the beak, a quadrangle and triangle (front minus back) and moving a couple of nodes for the desired angle from Basic shapes, 3 J's and 2 I's make up the fun little bird.  I used a font from my CK collection.

After this picture was taken, I added an embossed border to the top and bottom of the card for a framed effect... I think maybe next time, I may mask the image and stamp some chicken wire on the background... could be fun.

Well, it's time to get moving here.  Hoping for some additional time to play and explore.  I love seeing what the Sizzix eclips and the eCal software can do.

Posted at 09:14 AM in digital scrapbooking, Papercrafting | Permalink | Comments (0) | TrackBack (0)