Our last winter storm left a lot of us wishing for Spring weather and hoping it would come sooner rather than later.  I think we might just be getting our wish! 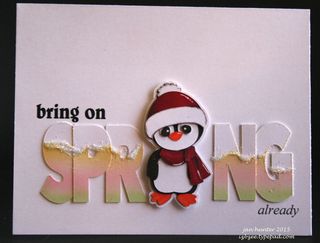 This little cutie is from the deep recesses of my SVG files folder... the download date was 2012 and is from Scrappy Dew.  My first thought was to make it small enough to fit on a twinchie. (see this post).. but as things go, it was just a thought.  It didn't make it to a twinchie but the size was reduced to just a little larger than 2" tall.  This little guy was colored in using Spectrum Noir markers.  I'm loving them and enjoy the full coverage they provide.  All the pieces were cut on my Sizzix eclips 2 using eCal2 from white card stock and colored. Since there are quite a few little pieces, applying adhesive using the Xyron X made it a breeze!

The card base was printed using PrintShop.  You can do the same in Word or PhotoShop.  PrintShop just happens to be my go to card making software at the moment.  Choose a font you like and use the Word Art option (in PrintShop, it's Headline)

The letters, S, P, R, N, G were cut 2x on the eclips as well.  In the eCal software I used an installed font and sized it to approximately 1.70 inches high.  After lining up all the letters and securing to a strip of painter's light tack tape, I masked the area that would remain white.  Using my eBrush and 3 markers (LG2, PP3, LY3) I colored in the lettering with the green on the bottom of the letters and working my way up the letters to the masked area.  After removing the mask, and put all the letters through the Xyron X, I put adhesive on the back of all the lettering and and then applied them to the card.

I left a space between the R and the N for the penguin (using pop dots) to rest.  Once he's in place, the front of your card is nearly done! 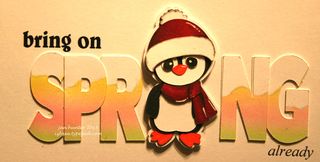 If you'd like to add a little more pop to this card, add a bit of glitter along the "snow line." 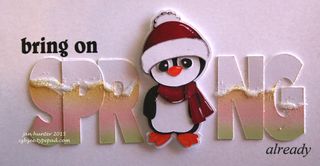 And yes, the time of day when you photograph, does make a BIG difference!

This file and quite a few others that have been "lost" in the recesses of my SVG files will seeing the light of day over the course of the next couple of months.  So stop by often!

Thanks for dropping by!  Wishing you a crafty and creative day!