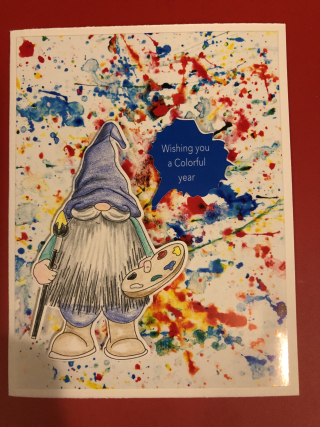 This is a pinterest another inspired card.. the Gnome image was purchased on Etsy.  The background paper was also purchased from dreamstime.com

Size the image as desired in your favorite program.  Print and cut.  I used eCal 3 software for the Sizzix eclips2 to accomplish this.  Watercolor pencils to color and blend on matte cardstock (110 lb).  The background image was printed using  bleed to edge on 4x6 glossy photo paper and then trimmed to size.  I used white card for the card base.  The splat shaped conversation bubble was in my stash (no identifiers on the file).  I added my sentiment and then printed and cut using the eclips again.

Once again, I left the inside of the card blank for personalization.

Thanks for stopping by today... a few more things to share over the next couple of weeks.  Hoping the upswing in momentum will continue for the next few months.  Hoping you'll be able to spend a little bit of creative time in your space soon if not today. Design the card front on a 4 x 5.25 inch rectangle.  Make sure that the graphic is in png format, import and set to print 2 cut print.  Choose the font for your sentiment.  Type, resize if needed and place as desired setting the font to print 2 cut print. Highlight everything. Group all.  Copy and paste to fill the page.  If you have a wide format printer, you can place 6 on the page.  If you don't, you can get 4 of the designs on the card.  Send to the printer.  Print.  Following the commands for Print 2 Cut, align the registration marks and cut.

Mount the design on the card base using your choice of adhesives.  I generally leave my card bases blank for a more personal touch.

Thanks for stopping by... I've been getting a bit of a slower than my normal crafting start this year, but I'm looking forward to sharing more of some recent makes in the next couple of weeks. 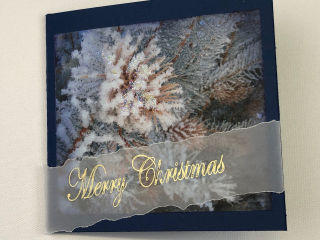 The Christmas cards were a hit with the fam... and being able to share Mom's voice in a recording was the highlight at our family party. These 5 x 5 cards are actually a triple fold with an EZ Sound module with a recording on them.  We were able to get Mom to record a Christmas greeting -- we finally got a usable one after 3 tries.  We thought it would be a perfect touch to the cards we were sharing with my siblings this holiday season.  THEY WERE A HIT!  The image is one taken by a friend of ours and I purchased the rights for commercial use.  Printed on glossy photo paper and trimmed to 3.50 x 3.50 for the 5 x 5 card version.  The foil quill was the perfect tool to use to apply the foil on the vellum.  Trim the vellum as desired and using some vellum tape, adhere to the card front.  I used Print Shop to create the insert for the inside of the card.

It's been a busy couple of months -- hopefully, as things slow down a bit now that the BIG work projects has been completed there will be more craftiness to come in the next few weeks.  Stay tuned! 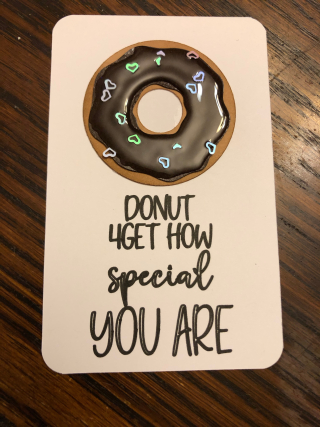 Another Pinterest inspired project.... These are perfect when paired with a sleeve of mini donuts or a single donut in a box.  The box is included in the file I found at Cutting Cafe - use the link in the materials list below.  It's a little difficult to find in the store as it's an older file.

create or place a tag shape on the mat,  Open the Donut Fun file and use the donut shape and topping you desire.  I chose to do the sprinkles for one of the tags... set those pieces to draw.  Group the pieces of the donut shape and resize as needed fit on the tag.  Center and leave in place for the moment.

Create the sentiment using your choice of fonts.  Set the type to draw in the eCal3 software.

Drag the donut off the tag.  Leave the sprinkles on the top of the Icing piece. If desired copy and paste the donut to another page.  If you plan on making multiples, fill the mat as desired.

Using the pen tool again, insert the glue pen.  Draw the sprinkles.  The glue is slow drying, so you have some time to cut.  Remove the pen tool and replace with the blade holder and cut.  On a separate piece of paper, set the  pieces you've used the glue pen on and sprinkle the glitter on the pieces.  Press lightly.  Let set for about 15 minutes.  Remove the excess glitter and set those pieces aside.

The donut base may need a little bit of inking.  I used some distress ink and blending tool to add a bit more dimension to the image. 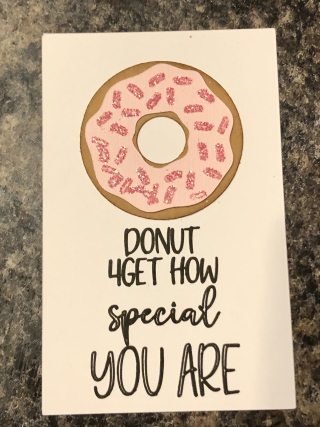 The chocolate icing requires a couple of additional steps.  Seal the piece with some mod-podge.  Let dry.  Add some dimensional glaze and sprinkle the nail art charms on the glaze while it's still wet.  Let dry. Thanks for stopping by... Hoping you're got some time scheduled for the weekend.  Enjoy your time and nurture your creative spirit.