I've been having fun making these tags... though several of the "planned" ones haven't turned out as I'd expected, so they haven't made the cut... but the next few did.
This tag was done using basic shapes and a few other commands found in the software.  I love the look and the layers. 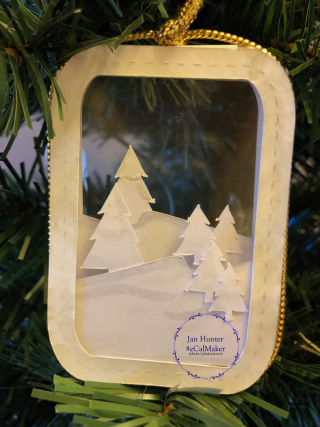 The photo doesn't do it justice -- but the studio lighting hasn't been cooperating the last few days... so my apologies.

I love adding a stitching line using the contour cut feature, inset shadow and then changing the line to a dashed line.  The white stock for the front cover was watercolored using an antique colorway.  All of the trees are washed in a little bit of light gray and some Wink of stella.  I used some stacked foam tape strips along the edge after the insert was created and placed on the back piece.  I wrapped a length of gold cording around the edge to cover the foam.