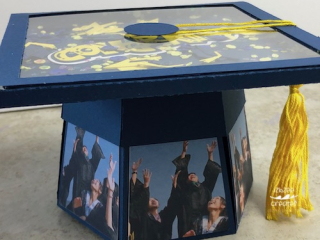 Graduation dates are looming and even a few have passed.  We've been a little busy this year... and next year, we'll see a few more.

For this box, I used the Graduation Explosion Box from Simply Crafty SVGs.  The original design is easy to cut and put together.  I wanted a little more for this box and after consulting with Sandy, we decided the easiest way to create a second layer of flaps in SCAL 5 Pro was to use the Inset Shadow Layer option.  It worked well.  I added a cut in the center of the panel to allow the use of the gift card pop up  which would be the internal focal point when the box was opened.

I used Blender & Pepakura to "build" a shaker box in place of the mortar board piece in the SVG file.  The same dimensions were used as the piece in the file.  Because I left the box as one piece, it did require use of a 11 x 17in cardstock.  You could create the basic box using 2 pieces of cardstock if desired.  The "frame" and transparency were also cut.  Adhere those to the box top BEFORE closing the box sides.  Using a fun font, the CONGRATS layered image was made and centered in the box.  All pieces for this project were cut using SCAL 5 Pro and the Skycut C24. 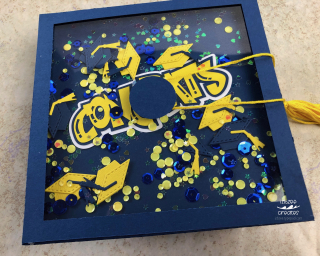 This box was created in our grandson's school colors.  Blue and yellow gold -- we even found some DMC floss that was very close to yellow cardstock we used for the caps and frames for the pictures.  The tassel was easy to make following Sandy's instructions in her assembly video. 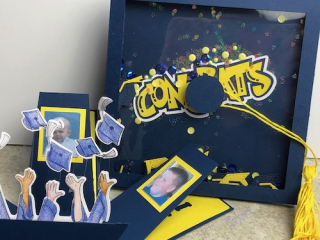 Dies from Queen and Co were used for the caps used in the shaker box.  Additional sprinkles and more were from several different shops.  And the stamped hands and caps were from Simon Says Stamps.

Hoping you've carved out some fun and creative time this week.  Take care and happy crafting!